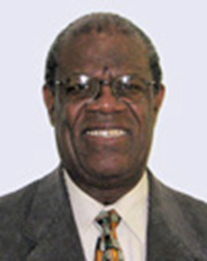 D.H. Kortright Davis, Ph.D., is professor of Theology at Howard University School of Divinity. He is also the Rector of Holy Comforter Episcopal Church in the District of Columbia. In addition to serving as a consultant to several other ecclesiastical bodies, Anglican dioceses, and academic institutions, he is a member of the Faith & Order Commission of the World Council of Churches.

Dr. Davis was trained for the Anglican priesthood at Codrington College in Barbados, by the Community of the Resurrection. He was ordained deacon in 1965, and priest in 1966 in the Diocese of Antigua, West Indies.

He has authored several books and chapters, and numerous articles. His list of books includes such titles as: “Emancipation Still Comin’”; “African Creative Expressions Of The Divine”; and “Can God Save The Church? Serving With Power: Reviving The Spirit Of Christian Ministry.”

Dr. Davis earned degrees from the Universities of London, Sussex, and the West Indies. His Doctor of Philosophy degree is from Sussex; and he has received an honorary Doctor of Divinity degree from the General Theological Seminary, New York, and St. Paul’s College, Lawrenceville, Virginia.