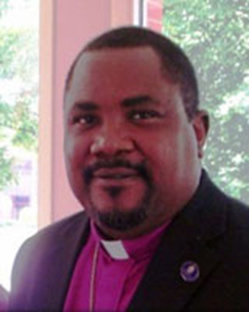 Rev. Canon Philip Wright to be the 14th Bishop of the Diocese of Belize in succession to the Rt. Rev. Sylvester Romero.  At age 38 Canon Wright is the youngest Bishop in the Province when he was consecrated on the 17th November 2005.

Canon Wright is a Belizean born in Belize City on 10th February 1967. His earliest education was in Anglican Schools at St. John’s Infant and Primary and later at Wesley College and Belize Technical College.

After a couple of years as a high school teacher at Nazarene High School and the Belize Technical College, Canon Wright answered the call to the ordained ministry and commenced preparation in1989 at Codrington College (seminary) in Barbados from where he graduated in 1992. He holds a Bachelor of Arts degree in Theology (Hons) and a Diploma in Ministerial Studies from the University of the West Indies and the degree of Master of Arts in Theology from the University of Birmingham in England.

Canon Wright was ordained in 1992 to the Sacred Order of Deacons and in 1993 to the Sacred Order of Priests. He has served the church in the pastoral and teaching ministries having taught at such Anglican institutions like Anglican Cathedral College, in various parishes and in several capacities and several Diocesan Committees. He is presently the Priest-in-Residence at St. Ann’s Parish, Belmopan. He has also been for the past number of years the Director of the Anglican theological Institute, responsible for the training of individuals for leadership roles in the church and the ordained ministry.